Revealer Info Article How to Become a Software Developer at Home

All Kinds of Information in One Platform
Revealer Info https://www.revealerinfo.com/2022/01/software-developer.html

How to Become a Software Developer at Home

Monday, 31 January 2022 0 comments
Do you want to learn how to become a software engineer but don't have the time to spend studying CS in university? Good news is that you can become a software developer without a college degree! 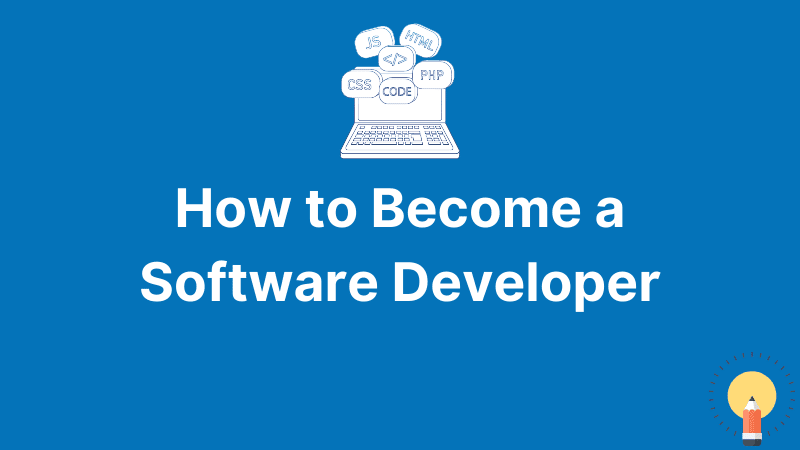 Whether you're re-entering the workforce or are trapped in a job you despise (administration, operations, banking, etc.), becoming a software developer is entirely possible—as long as you're ready to put in the effort.

What Exactly Is a Software Engineer?

A software engineer, by definition, is someone who creates the code that powers software products (video games, operating systems, apps, features, robots, etc.).

What does a software engineer do?

Create, assemble, and test software applications
Understand criteria and use coding/technology to solve issues
Programming languages are used to convert instructions into something that a computer can comprehend.
You might write code from scratch, work with a team of software engineers, or improve/debug existing code.
Read More:
It is possible that you may need to collaborate with other specialists, such as a UX designer, graphic designer, product manager, or technical writer.
The intricacies of becoming a software engineer, like any other position, will vary based on the software engineer needs of each firm.

Software developers work in a favorable market, and as a result, they may take advantage of a number of advantages that are routinely provided by prospective employers in the United States. Life and health insurance, paid vacation, profit-sharing, a sizable signing bonus, and other perks may be included.
Big IT organizations, which serve as the gold standard for premium benefits for software engineers, go so far as to provide daily fresh prepared meals for free, in addition to family-friendly advantages such as paternity and maternity leave, nursing rooms, and childcare centers, among others.

Employee perks for Facebook engineers are among the finest in the industry. Employees can use the on-site spa and barbershop, as well as the doctor, dentist, and optometrist.
In addition to dental, vision, and health insurance, these benefits include complimentary meals, paid time off, sick leave, paternity and maternity leave, and gym and fitness reimbursement.

The list of Amazon software engineer job perks is rather lengthy. It covers vision, dental, and health insurance, as well as pet insurance; health savings accounts; paid time off; maternity and paternity breaks; life insurance; and complimentary beverages and snacks.
Employees may also qualify for a transportation stipend, a relocation incentive, immigration aid, a 10% discount on all Amazon purchases, and adoption assistance.

Google's employment perks for software professionals are likewise unrivaled. They provide complete insurance coverage as well as legal advice, psychological therapy, child care, and recommendations for pet care. Google is also well-known for providing high-quality complimentary lunches.
Furthermore, workers have on-site access to massage therapists, medical personnel, gymnasiums, and decompression capsules. Finally, there's the "Death Benefit," a one-of-a-kind incentive that guarantees half of a Googler's pay for 10 years to the spouse of a Googler who dies while working for the business.

What Is the Best Way to Become a Software Engineer Without a Degree?

Becoming a software engineer takes a large amount of time, and acquiring a competitive advantage via portfolio projects or certifications might take much longer. However, if you are ready to put in the time and effort, it may lead to a satisfying profession.

All software developers must be fluent in one or more of the programming languages listed below.
Python: Python, which is now one of the most popular programming languages in the world, provides software professionals with a standard and open-source language for general-purpose programming. Python provides a dynamic feature set that is portable across a wide range of operating systems. Python also includes automated memory management, which eliminates the need for software developers to manually monitor memory management. Python is becoming one of the most important skills for software professionals.
Javascript: Java, another general-purpose programming language, has been a core object-oriented language for almost two decades and is one of the most critical skills for software developers to have. Because of its security strengths, software programmers place a high value on Java. Java, which is also platform-agnostic, provides software developers with a dependable safe and design-friendly language that allows them to find work practically anyplace.
SQL: SQL, which is now more than 30 years old, is one of the most widely used databases.
Database languages are widely used. Software engineers are often not in charge of database maintenance or organization, but they do need to learn how to explore databases in order to design programs that interact with them.
Ruby: Ruby, which was created in 2011, is another object-oriented language that software professionals use to rapidly construct online applications. Ruby is often used in conjunction with the Ruby on Rails framework. Ruby, which is likewise open-sourced, makes use of automated memory management (or "garbage collection") to provide a variety of programming paradigms or features.

If you have no employment experience, this is the most significant portion of your CV. Projects may be anything linked to programming, such as a Python script, Java software, website, or mobile app. Don't simply list the technologies and languages you're familiar with; demonstrate how you've utilized them. Include hyperlinks to each project on your CV, assuming you're sending an electronic copy.